A year on from their self-titled debut, Bristol-based sound sculptors Dot Product are back with a follow-up that stays true to their experimental principles while offering up new textures and arrangements for their hard-won sonic content.

It’s been a busy year for Adam Winchester and Christopher Jarman, the pair behind the project. Following the release of Dot Product on Osiris Music in March 2016, they appeared at prestigious festivals such as Atonal and Simple Things. This spate of shows has fed back into 2080, a new body of work that feels distinct from its predecessor while retaining the unnerving, distorted finish that has come to define the Dot Product sound. It was largely created through studio-based improvisation as a natural response to the performance set up the duo had developed.

Rhythm plays a significant role in the early strains of 2080, whether triggering static blasts or stirring up low frequency tones into a seductive waltz, but as the album progresses these rhythms give way to anchorless drones, refined metallic shimmers and red-lining noise blasts. Even if such ingredients were present on the previous album, here they feel thrillingly out of reach. When occasional field recordings swoop into earshot as on Electric Flesh, it’s hard to tell whether they might be a real-world mechanical manifestation or a visceral shard of sound design.

Between the tonal lines lurks a narrative. Previously Dot Product concerned itself with a scientific approach, and such experimentation gave Winchester and Jarman the tools to define their venture. Now 2080 sees them applying these tools to a specific creative vision. That vision may be more implied than specified, but it’s provided this intriguing pair with their next logical step on a journey into uncharted sonic waters. 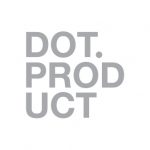 Housed in a white and grey printed shrink wrapped sleeve.

Mastered by Simon Davey at The Exchange Vinyl.